While California gets the most earthquake press, Kentucky most certainly is susceptible to earthquakes, too. Our state’s strongest recorded modern quake was a magnitude 5.2 tremor which struck Maysville (about 60 miles northeast of Lexington) on July 27th, 1980. In late 1811 and early 1812, a series of catastrophic quakes centered on New Madrid, Missouri rocked Kentucky’s western regions; modern estimates say the strongest of those had magnitudes between 7.5 and 8.0. Seismologists estimate that the New Madrid Seismic Zone has a 25-40% chance of producing a significant quake within the next 50 years.

The Wabash Valley Seismic Zone, located along the southern Indiana-Illinois border, also has the potential to affect Kentucky and the surrounding region. The U.S. Geological Survey (USGS) map to the right shows the locations of the New Madrid and Wabash Valley Seismic Zones. Red dots indicate earthquakes measured between 1974 and 2002, while green dots indicate pre-1974 quake reports. Click the image for a USGS fact sheet (3 MB PDF) containing a larger version of the map. 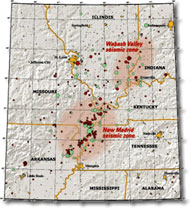 Over millions of years, the rocks beneath the earth’s surface move against one another, gradually building up strain. An earthquake occurs when this accumulated energy reaches the breaking point, causing huge masses of rock to shift. The resulting force is transferred to the ground above, and the energy radiating out from the initial break or slip causes the ground shaking that we know as an earthquake.

As this energy reaches the surface, it shakes the ground and all structures in contact with it. This shaking is the primary source of quake damage. In areas of loosely-packed, moist sediment, the shaking also can cause liquefaction, temporarily making the particles of that ground act like a fluid. Liquefaction can cause structures to settle suddenly and unevenly, which also results in damage.

Earthquakes can happen at any time of the year, day or night. Currently, there is no effective mechanism for predicting a quake or providing more than a few seconds’ warning.

Most earthquake injuries come from falling objects and debris, not the actual movement of the ground. To prepare your home:

Many of these preparations aren’t unique to earthquakes. Securing property and furniture also can reduce the damage from a tornado (or teenagers).

If an earthquake strikes:

If you can’t get under furniture, move against an interior wall that’s away from windows, hanging objects, and tall furniture and appliances. Avoid doorways and similar structural elements, as solid furniture gives better protection from both falling debris and structural collapses.

If you’re outside when an earthquake strikes, get into the open. Stay away from buildings, power lines, chimneys, trees, and anything else that might fall or generate falling debris. In hilly areas, stay away from cliffs, overhangs, and other terrain features that could be shaken loose into landslides.

If you’re driving, pull out of the right-of-way and stop. Don’t stop under a bridge, overpass, light post, or anything else that might fall. Stay in your vehicle until the shaking stops. When you resume driving, watch out for breaks in the pavement and fallen debris. Also keep an eye out for emergency vehicles, as well as for other motorists and pedestrians who may be looking at damage rather than traffic.